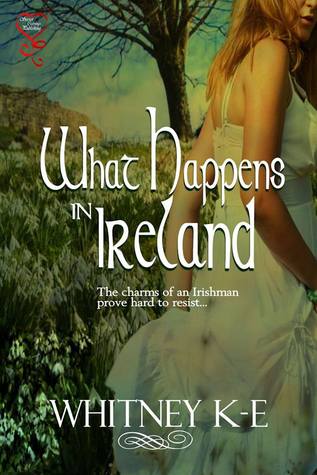 Have you ever wondered what happens in Ireland? When Australian, Kate Barrow, meets a handsome Irishman in a Dublin bar, she has no idea that he is about to turn her world upside-down and inside-out. In Ireland to take on a position on a thoroughbred stud, Kate is shocked when her manager-in-co reveals himself to be the same man she’d met in Dublin. Jack is drawn to Kate. The problem is, she won’t have him. But Jack has always loved a challenge and the intriguing woman from Oz is one he cannot resist. Harbouring the sting of another man’s betrayal, Kate is certain she wants nothing to do with love and nothing to do with Jack O’Reilly. But when naked torsos, Mother Nature and dysfunctional umbrellas start plotting against her resolve, she realizes the charms of an Irishman are going to be hard to resist.

What Happens In Ireland is the debut novel, and the first in a series, for Australian Author Whitney K.E. It revolves around Kate, an Aussie who has always wanted to travel and gets offered the job of a lifetime on a stud farm in Killarney. On her first night in the country, Kate meets a charming young Irish lad and as they say the rest is history.

What Happens in Ireland is a fun,witty and flirty read that just oozes sexual tension. It features believable (and highly entertaining) characters cast upon a wondrous and beautifully described exotic backdrop facing every day trials and tribulations. The character’s are easy to connect with, and the events of the narrative are expertly paced. It’s a story about love and friendship, and finding that special someone who might just be worth the chance and heartache. What’s most surprising about this novel is the command that Whitney has over the English language and the way she has beautifully crafted this narrative. Being a young Australian author, with this being her first novel, I can’t help but take my hat off to a young and remarkable talent that I’m sure we will see great things from in the future.

With vibrant backdrops and gorgeous descriptions about meadows and rolling green fields, I cant think of more perfect and exotic location to set a rural romance story. And what a story it is. Not as fast paced as many other romance novels I’ve read lately, What Happens In Ireland, lets you fall in love with the characters and their surroundings as the characters themselves fall in love. It’s perfectly paced with a slow decent into a mind blowing romance, but with just enough – and by just enough, I mean excessively oozing in the right way – chemistry and sexual tension. Right from the start Jack wants Kate and he’ll do just about anything he can to make her believe she’s good enough, that he is good enough. But Kate’s still hesitant, and although she can’t deny her body’s physical responses to the irresistible man before her, she’s not ready to get involved in any shape or form. Especially not emotionally. She won’t allow it. What follows is a balanced love story that will leave romantics wanting more.

What Happens in Ireland features a strong cast of energetic and witty characters, who are full of life and charm. Kate and Jack are two strong, like minded and stubborn characters who know what they want; the difference being that only one is ready and willing to put everything out there on the line for a chance at true love. With an array of vibrant and warm supporting characters such as William, Jennie and Tom, there’s not a lot missing from this fantastic mix of personalities who immediately make you feel at home.

One of my favourite aspects of this book, is the interactions between the characters. At his heart, this narrative is witty and hilarious, with the characters more often than not trying to out do themselves. No one takes themselves too seriously and there’s a warmth in that that becomes endearing. Likewise, this novel is set in Ireland and it showcases some of the Irish traditions and legends in an authentic way that never feels forced. Whitney K.E’s passion for both her writing and the Irish culture really shines through the narrative and it’s hard not to fall in love with the characters and the narrative in turn. It’s clear that Whitney has gone to great lengths to capture the very essence of Ireland and it’s culture, while staying clear of stereotypes and yet staying true to the heart of the country. This is most obvious through the flawless portrayal of the Irish dialect throughout the novel that really makes you feel as you are witnessing everything that Kate does.

My only issue with this narrative was the slight repetition of Kate’s backstory. Having been hurt years before by an old boyfriend named Michael, Kate is cautious when it comes to love, and wary when it comes to Jack’s charismatic Irish charm. A point that often puts her on edge when her ever present boss is around. Although we learn a bit about Michael and Kate’s issue with him, I never felt we really got the entire story. Which was unfortunate, because at times I felt it held me back as a reader trying to connect to Kate and understand her actions. And it might just be my reading of it, but I never thought Jack was informed about it either, so when Jack brings up Kate’s fears and her past, I was surprised and alarmed in many ways because the whole issue of Michael was brushed over. However, this was a minor flaw in the narrative at large.

With quick and witty comebacks and riddles galore it’s hard not to fall in love with the main characters. What’s more, Whitney’s suburb use of dialect and dialogue makes you feel as though you have fallen through the pages and are in Ireland yourself. So sit back and enjoy a glass of whiskey as Kate and Jack and the cheerful Irish gang take you along for the ride. You won’t be disappointed.

Beautifully written, and well crafted, What Happens In Ireland is not to be missed by die hard romantics or lovers of everything Irish.

Deceive Me In Ireland, book two in the series is due for release January 29, 2014.

For more information regarding Whitney K.E and her work, visit her website or her goodreads entry. To purchase your own copy of What Happens In Ireland visit the publishers website or Amazon.

2 thoughts on “REVIEW: ‘What Happens In Ireland’ by Whitney K. E”