Format: Ebook (Courtesy of the Publisher and Netgalley) 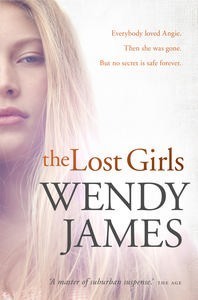 From the bestselling author of The Mistake comes a hauntingly powerful story about families and secrets and the dark shadows cast by the past.

Angie’s a looker. Or she’s going to be. She’s only fourteen, but already, heads turn wherever she goes. Male heads, mainly . . .

Jane worships her older cousin Angie. She spends her summer vying for Angie’s attention. Then Angie is murdered. Jane and her family are shattered. They withdraw into themselves, casting a veil of silence over Angie’s death.

The shocking truth of Angie’s last days will force Jane to question everything she once believed. Because nothing – not the past or even the present – is as she once imagined.

When I saw that Wendy James had a book up on Netgalley, I quickly requested it and smiled like a mad woman when I was approved. And while it’s true the novel sat on my e-reader for a while unread, once I got to it, the narrative blew me away. So much so that as soon as the book was officially released in paperback, I snatched up not one, but TWO copies.

Cleverly told The Lost Girls is a compelling psychological thriller that is sure to leave you glued to the page as you try to work out what exactly went down on those two occasions in 1978. The narrative is told chronologically for the most part, with the narrative intercepted by interview transcripts. It’s equal parts engaging, horrifying and simply entertaining, while asking the time old question of what would you do, if that was your family?

Like every great crime novelist Wendy James has expertly built the suspense in her novel so that it is almost impossible to know exactly who the killer is. While it’s true there are plenty of clues scattered throughout the book, the narrative is structured in such a way that you are always second guessing your sense of judgement, and that of the characters. In the end, James has created such poignant and loveable characters that you don’t want anyone to have committed the crime, nor do you want anything but their happily ever afters for each and every single one of them.

At it’s core, The Lost Girls is primarily an aftermath book. That is a book set after the event of something, in this case some twenty years after the murder of Angie and the second girl. It’s a tale about the families and how they cope with such terrible events and grief. How strong the human heart is when faced with guilt, betrayal and uncertainty and how the past is not always what we remember it as. It’s a quick, heart-stopping, gut-wrenching, thrilling narrative that is sure to leave the reader with just as many questions as it does the characters. How would you cope if this sort of thing happened to your family? Would you react the same way? It’s the kind of story that shows us just how many shades of grey are in our seemingly black and white world. How the past is sometimes different to our memories and that circumstances are sometime unfortunate.

What’s particularly powerful about Wendy James’ novel is the setting and people involved. It’s the summer of 1978, the kids are home and bored and free to roam the streets. The world is still considered safe, that is until the unimaginable happens to an every day, ordinary run of the mill family. By choosing your everyday people and placing them in such a horrific circumstance, Wendy James is able to challenge your ideals of not only the crime committed, but the circumstances involved and the motives. She seeks to question her readers about what would they have done? Would they have done it differently had they been in the Griffin family’s shoes? Could they live with themselves knowing all that they know? The world is a murky place, no matter how seemingly innocent and safe it may appear on the surface.

These concepts and the fact that the novel is set twenty something years AFTER the crimes occurred, made me think of Honey Brown‘s After the Darkness, where Trudy and Bruce Harrison are placed in a particularly awful situation, only to survive, but at what cost? It’s these questions raised about the past, and the aftermath that interest me greatly as a reader and perhaps why this book appealed to me so strongly. After all, James novel showcases just how badly society is so focused on the here and now, that we often forget or misrepresent our past and stumble blindly if not ignorantly into our future. A point made stunningly clear in The Lost Girls through Jane and Michael’s rose tinted memories of Angie, as opposed to the darker and less positive memories of Robert Tait (Jane’s Husband) and Barbara Griffin (Jane and Michael’s Mum).

I’ve read just about every one of Wendy James’ books to date, and this is by far her best one yet. So do yourself a favour, and pick up a copy ASAP. You will not be disappointed.

Ideal for fans of Honey Brown‘s After The Darkness and The Dark Horse. Or anyone who just wants to read a well written suspense story about real people in everyday settings.

Purchase a copy of The Lost Girls from the following retailers:

3 thoughts on “REVIEW: The Lost Girls by Wendy James”