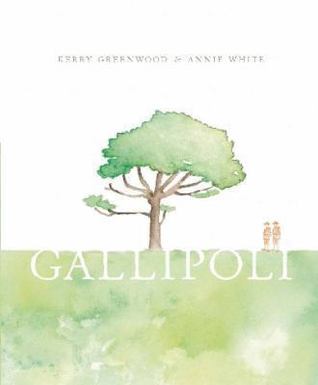 Dawn approaches on 25 April 1915 and ANZACs Bluey and Dusty sail towards Gallipoli. As their ship gets closer, the two friends hear the noise of battle, and worry if they are brave enough for what lies ahead of them.

Award-winning author Kerry Greenwood tells the story of a remarkable friendship, and the battleground that shaped a nation.

Gallipoli is a beautiful book to behold. Annie White’s illustrations are stunning, and support the story extremely well evoking an emotional response and understanding in a deeper meaning then words.

Gallipoli is the narrative of Bluey and Dusty who are part of the Australian Light Horse regiment and are being waved off to war at the narrative’s opening. Through these two characters the reader is taken on a journey with them as they discover the truths and reality of war are not exactly what they were lead to believe.

What is particularly remarkable about this narrative is the way in which Kerry Greenwood and Annie White work together to tell a multi-layered story about the experience of war right from the moment the soldiers left home. As a reader we are taken on journey and exposed to the harsher truths of war in much the same ways the soldiers were at the time. The language used to tell this short is simple and at the beginning full of hope and wonder for the adventure the boys think they are on.

“It was 1914 and crowds of young soldiers cheered and waved from the train to their friends and family. …

“A convoy of troop ships carried the thousands of soldiers who had ‘joined up’ eager for adventure. They were headed for the battlefields of Europe. where the world was at war. It all seemed very grand and very important.”

This barely  concealed excitement and hope changes as the book progresses to a more sombre feeling as the characters and readers experience the reality of war alongside Bluey and Dusty, and yet there’s never a negative connotation of war – i.e. that what they were doing was wrong.

” ‘We’re nearly there, Dusty,’ Bluey said, with a hint of excitement. But as they got closer, they felt the shaking of the land and the sea, and worried that they might not be brave enough for what lay ahead.”

” On most days, the thunderous booming of shells and the zing of gunfire was deafening, but sometimes there were small moments of silence and peace.

“Everyone was hungry, tired and afraid, but they all did their duty, as soldiers, and as mates.”

Kerry Greenwood has worked hard to make sure her narrative is balanced, allowing the reader to make up their own minds about the war effort and experience. In fact it seems that her main goal is simply to inform through narrative the younger readers about where the ANZAC legend came from and what it meant to go to war, to be a ‘digger’ and to put your life on the line for your country. The key themes of mate-ship, bravery and courage really shine through the narrative. What’s more, Bluey and Dusty witness historical events and people such as John Simpson and his donkey, Duffy who carried the wounded to safety. Even included in the story is the break in fighting between the Turks and the ANZACs.

“In between the fighting, an unexpected bond began amongst the exhausted enemies. They worked together to bury the dead and swapped gifts instead of gunfire. The diggers offered bully beef, and the Turks gave fruit and sweets in return.”

Slight humour has been injected within the narrative to break up the more heavy elements of war such as injuries, loses and death, without disturbing the story nor limiting it’s serious subject matter.

” ‘I can tell you and Duffy are going to be mates, Dusty!’ Bluey joked. ‘You’ve almost the same name.. and ears!’ he laughed, his eyes twinkling.”

‘My stomach’s rumbling so loud, you’d think it’s another bombardment!’ said Dusty. ‘I’ll go get us some food.’

When humour has been deployed within the story, it’s usually on a full page illustration, and this is where the dual nature of the story can be seen. For in the following image both sides are burying their dead and sharing sweets and while Dusty states that “Bluey would love these Turkish sweets” and thus pulling the focus of the readers eye to the sweets being swapped in the foreground, behind the pair the remaining soldiers are digging graves and burying their dead. These two layers offer hope in the most black and desperate times, and mean that a younger audience is not overloaded and traumatised, but also that an older audience (i.e. the adult reading the narrative) is able to connect and give the book credit and evaluate it’s worth based on the balance of fact, truth and honest storytelling that will keep the kids informed but also entertained.

Overall this is a fantastic narrative about the Gallipoli war experience and a great aid in getting kids to understand the ANZAC legend and it’s greater meaning. By covering everything from deployment and training to arriving at the beach and fighting to make it ashore, food and weather conditions to the types of friendships made and the injuries sustained Kerry Greenwood has done a great job in delivering a well balanced and easy to read narrative with emotional impact and connotations.It is made all that more accessible to kids by the friendly but realistic illustrations created by Annie White that add that little bit extra to the story whether that be through the illustrations of the landscape and trench life and what it meant to be ‘going over the top’. Below are two examples of Annie White’s illustrations and just how important they are to both the story and the impact of the story (the first one is from the beginning of the book and the second from almost the end). I particularly liked the second of the two for many reasons; its not a part of history that is normally represented widely and I never knew how they left, all I knew is that the troops were withdrawn without alerting the enemy.

The story is gentle and thus suitable for younger kids (5 years and up) while still maintaining true to its message and the ANZAC experience. My biggest issue with the story probably comes at the end where it’s made out that the soldiers who returned home lived almost happily ever after without any further problems resulting from the war. While I understand the meaning behind this, and that the aftermath of the war is an entire subject matter on its own, I felt almost cheated by the bright happily ever after ending that simplifies life as “they went to work, married, had children. Their children had children…”.

This book would make a great addition to your bookshelf, one that I am proud to have on mine despite not being a child or having children of my own as of yet.

To purchase a copy of this book visit any of the following retailers:

One thought on “REVIEW: Gallipoli By Kerry Greenwood (Author) and Annie White (Illustrator)”