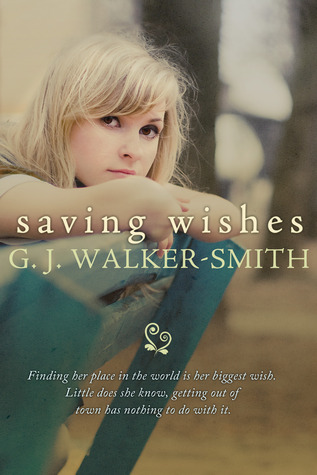 RRP: Free on itunes and Amazon

For Charli Blake, being seventeen is a tough gig.
She’s been branded a troublemaker, her reputation is in tatters and she’s stuck in Pipers Cove, a speck of a town on the coast of Tasmania.
Thankfully, it’s temporary. Her lifelong dream of travelling the world is just months away from becoming reality. All she has to do is ride out the last few months of high school, which is easier said than done thanks to a trio of mean girls known as The Beautifuls.
When Adam Décarie arrives in town, all the way from New York, life takes an unexpected turn. His arrival sets off a chain of events that alters her life forever, convincing her of one thing. Fate brought him to her.
Saving Wishes is the story of a girl who doesn’t quite fit the life she’s living, and the boy who helps her realise why.

Every now and then you stumble across a truly fantastic author who is able to capture not only your attention, but your heart as well within a matter of a few pages. Australian born and bred GJ Walker-Smith is one of these authors.  I first reviewed this book early last year (2013) when I signed up to be part of this book’s blog tour just after it’s initial release. Little did I know back then (in my early blogging days) just how much this book and author would come to mean to me and what it had the capacity to do to me not only as a person, but as a reader and a dreamer.

Saving Wishes is the first book in the Wishes Series by Australian author GJ Walker-Smith. It’s the story of Charli Blake, a seventeen year old girl who dreams of places bigger and better than her small coastal home town of Pipers Cover in Tasmania. Having dreamt her entire life of seeing the world, its no wonder that she’s itching to leave in the last few months of High School, and yet even her wildest imaginations/daydreams couldn’t have thought up what these months would hold in store for her. For just before she finishes school, 21 year-old Adam Décarie arrives in town and despite a less than stellar start (Adam may have almost run her down on his arrival in town) the pair turn each other’s worlds upside down as they navigate the world and learn to find out who they both are away from prying eyes and small towns constructs and overbearing parents.

Charlotte ‘Charli’ Blake is one of the most unique and fascinating characters in any young adult book I have ever had the pleasure to read. She’s strong, sassy, charismatic, unique, quirky and a free spirit. In many ways she reads like an ‘old spirit’ trapped in a small town where her world views and opinions are not necessarily taken kindly. She’s strong and spirited when she needs to be, but underneath all those quick and witty comments lies a vulnerable seventeen year old who is trying frantically to find her place in the world. Considered too ‘out there’ at times, and potentially ‘strange’, Charli is a day dreamer who knows the world by an alternate set of beliefs and stories  compared to the kids she has grown up with, for Charli’s older brother and guardian Alex has raised her on stories of magic, fairies and hope.

In many ways my passion and love for this character and thus the book stems from the way in which I was drawn to GJ Walker-Smith’s portrayal of Charli in this small town setting. Right from the start I was drawn to Charli’s mind; she is one of the strongest intellectual characters I’ve read, which was a fantastic change for a contemporary young adult (YA) character. What’s more Charli is different from those around her. She’s a dreamer and frequently inhabits a world her and her brother affectionately named La La Land where anything is possible and magic not only exists, but is the reality through which she can understand the world.  Although Adam’s arrival in town sparks a series of interchangeable events in her life that will forever alter her as a person and her life long beliefs, he isn’t there to save her like other YA male main character. In fact, I believe that Adam is saved by the spunky little firecracker that is Charli, as she challenges his beliefs in everything he has ever known about his world when Charli invites him to see the world through her eyes.

Adam Decarie is a 21-year-old French-American who couldn’t be more different from Charli if he tried. Born in to the world of money and destined to be sensible lawyer back home in New York City, he came to the Cove to visit his cousin Gabrielle (Charli’s French teacher) and the last thing he expected to find was a summer romance with the Queen of La La Land herself. As a whole Adam is an… interesting character who is sure to make you angry and frustrated one minute with his narrow mind and selfish ways and yet makes you swoon the next with his romantic antics and the love he has for a certain rebel. And for that, I think I want him as my book boyfriend!

I absolutely loved GJ Walker-Smith’s writing which not only blew me away, but took me away with Charli to a world that I think I can understand better than the one I inhabit. The narrative was beautifully constructed, and despite having been able to predict a certain moment in the book, I found it completely touching and true to life. In fact, over a year later I still think of the power of THAT scene and the way it moved me and transformed the book. It haunts me with its beauty and emotions and left me gushing for most of last year. In fact it took me weeks to write my original review because I couldn’t form words to explain it’s power.

Ultimately Saving Wishes is a coming of age story which promises to bring change and romance to the world of its readers. Much like the stories themselves, the reader will be enchanted by Charli’s tales and her mischievous adventures and Adam Décarie will delight your senses in ways only a Décarie can do.

Over a year later, Saving Wishes is still one of my stand out YA books. There’s just something about this quirky, imaginative and romantic contemporary tale that ticks every box for me and speaks to me on a level deeper than just words on a page. The character’s spoke to me as tangible people and at times felt like they could have been members of my own family; their struggles were real and easy to relate too, but most of all the narrative was beautiful, both in it’s portrayal (craft) and its events. Seriously, this book was something else entirely; Saving Wishes is a book like no other I’ve read before.

Saving Wishes is a stunning début by a must watch Australian Indie Author whose career I’m sure will prove to long and lustrous. With this book, GJ Walker-Smith became my one-click must buy author and I’ve never looked back since. I personally couldn’t wait for the second book in the series Second Hearts.

To get your FREE copy of SAVING WISHES head to any of the following retailers:

One thought on “REVIEW: Saving Wishes by GJ Walker-Smith”