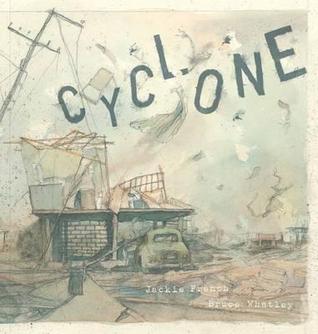 Outside, a giant groans and growls,
A wind that batter, shrieks and howls.
A crack, a lurch, our house is torn
Ripped to paper by the storm.

From the award-winning creators of Flood and Fire comes Cyclone, a stunning tribute to the Darwin families whose indomitable spirit triumphed after Cyclone Tracy in 1974.

Jackie French has once again teamed up with Bruce Whatley to produce a moving tribute to a community rattled and broken by Cyclone Tracey and the devastation it left behind on what should of been one of the happiest days of the year.

Before I go too much into this book, I’m going to point out that I wasn’t born when this catastrophic cyclone hit Darwin in December of 1974. And although I’d heard about Cyclone Tracey and knew a bit of background knowledge about it, this picture book pointed out just how little I knew and understood the reality of a cyclone to be. I can’t imagine what those poor people who endured this beast dealt with and lost, but I do now have some basic understanding of the horrific environmental event and the lasting impact it had on the community.

The first thing that stood out for me with this book was the beautiful dedication from Jackie French. French dedicates this book to a man she spoke to who lost so much – his house was destroyed and his community desolated – but kept his spirit and was lucky as his family survived. He spoke to French just after the cyclone, and once again when his family returned to the community and in many ways, this book is his story. French dedicates the book

to […] those who suffered not just Cyclone Tracy but the anguished months after, to all the heroes who stayed to rebuild this shattered town, and to all those who had the courage to return: this book is yours.

So already we know this book is going to be about the tragic event that robbed Darwin of Christmas in 1974, but also the aftermath of the event. An inclusion which is not only powerful, but poignantly moving, which also serves to keep the narrative and picture book both as historically correct as possibly and yet still suitable for children to read without the fear of trauma and too much sadness.

Cyclone is the story of Cyclone Tracy as it ripped through Darwin on Christmas Eve of 1974. It’s a story about expectations, fear, loss, family, one’s home town and how one community rebuilt it self back up in the face of such devastation. It’s a story of hope and possibility. Told through French’s iconic words and Whatley’s trademark full double page illustrations, the book itself is a beautiful, heartbreaking and uplifting sight to behold.

The narrative starts with hope and cheer as one family celebrates Christmas Eve despite the threatening grey skies that take over most of the page, and indeed most of the book. Things turn bad quickly with the storming ripping quickly through the book, a crippling mess of bleak and dark images left in it’s wake as the traumatic event unfolds. But not all hope is lost, and the entire book isn’t all doom and gloom, for French and Whatley have gone to great length’s to produce a story that is true to history, and yet one that offers hope as new life returns

Obviously going into this book I had some expectations of what to expect having seen the cover and reading French’s dedication … but they were nowhere close to what was before me on the pages.  Whatley’s illustrations were dark and gloomy, double page spreads that screamed a stormy and wild night that would in normal cases be considered rather miserable and ‘sad’. But it was French’s text that knocked me immediately for six:

Pile the presents by the tree

Though clouds spiral out at sea.

But Santa’s Sleigh is on it’s way.

How can wind hurt Christmas Day?

Ignore the storm as rain pelts down

on parties across Darwin town.

You can almost feel the communities happiness and positivity glowing through the text and I for one would have been thinking along the same lines of them. A bit of rain? So what. But you know these characters and people are/were in for so much worse that it kind of made me stop and think, a heavy sense of dread creeping into my stomach. A cyclone of this proportion is the last thing anyone would expect at Christmas!

The story continues on to vividly recreate the sensory experiences of the storm as a family huddle first inside their house and then under their barbecue:

A Crack, a lurch our house is torn

Ripped to paper by the storm.

Roof snatched up, our presents, tree.

Hand in hand we try to flee.

Slashed and bitten by debris.

Huddle in our barbeque

Dad crouches to protect us too.

Combine this with Whatley’s whirlwind illustrations and you can’t help but feel right then in the moment. Which is a testimony to both French and Whatley’s skill in bringing the story to life on the page.

The narrative continues with the family enduring the Christmas Eve from hell, before the storm passes and a sun dawns a new day. With most of the community evacuated, a few brave souls stay behind to rebuild the town and make it safe again.

While French’s story is profound, I think it’s Whatley’s illustrations that stand out in this book. His illustrations start murky full of greying skies and miserable weather before growing quite dark as the cyclone hits Darwin full force. But once the storm clears, so does the darker elements of both French’s story and Whatley’s illustrations. For colour starts to slowly seep back onto the page with the dawning of a new day and the arrival of help. The narrative finishes having covered the storm’s approach to the rebuilding of the town and the community’s return back home where light and colour return to the narrative giving the town and it’s people (and the little readers at home) hope and a happy ending:

Christmas trees and lights appear,Santa Claus will come this year.

Cyclone is not your stereotypical bright and bubbly picture book. Instead it features darker coloured illustrations and covers a period of destruction and loss rarely seen in children’s books, but it’s also uplifting and true to life, a point that Jackie French makes sure to never shy away from in her work. It’s a perfect example of the harsh and unpredictable reality of the weather and poignant reminder not to take anything for granted.

A perfect guide for children learning about the weather/environment and some of Australia’s history dealing with forces outside of our control.

Jackie French and Bruce Whatley have teamed up to create a variety of children’s picture books on natural disasters in Australia. The list includes :  Flood, Fire and Cyclone. 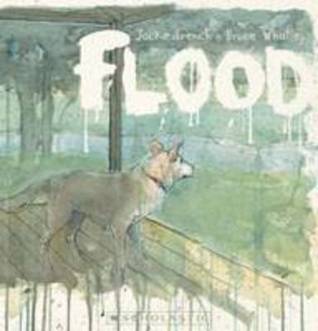 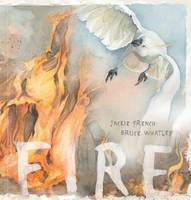 To learn about Jackie French and Bruce Whatley, visit the following websites:

To purchase a copy of Cyclone visit the following online retailers: