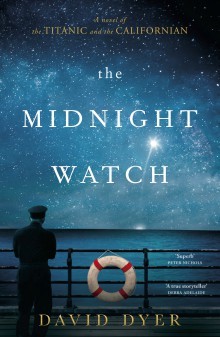 David Dyer’s astonishing novel The Midnight Watch is based on the true story of the SS Californian, the ship that saw the Titanic’s distress rockets and yet, unfathomably, did nothing. A psychological thriller.

On a wretchedly cold night in the North Atlantic, a steamer stopped in an icefield sees the glow of another ship on the horizon. Just after midnight the first of eight distress rockets is fired. Why did the Californian look on while the Titanic sank?

As soon as Boston American reporter John Steadman lays eyes on the man who stood the midnight watch on the Californian, he knows there’s another story lurking behind the official one. Herbert Stone must have seen something, and yet his ship did nothing while the calamity took place. Now Stone, under his captain’s orders, must carry his secret in silence, while Steadman is determined to find it out.

So begins a strange dance around the truth by these three men. Haunted by the fifteen hundred who went to their deaths in those icy waters, and by the loss of his own baby son years earlier, Steadman must either find redemption in the Titanic’s tragedy or lose himself.

Based on true events, The Midnight Watch is at once a heart-stopping mystery and a deeply knowing novel – about the frailty of men, the strength of women, the capriciousness of fate and the price of loyalty.

This book… man this book.

We all know the story of the Titanic. The great sensational cruise liner that was unsinkable until it … well sank. The story of Rose and Jack. The tragedy that was. The Midnight Watch by David Dyer is this story and yet, it’s so much more and not quite that Titanic story at the same time.

Simply put The Midnight Watch is an emotional journey that will have you screaming at the book, begging the characters to make different choices because you know the outcome already. You know that the boat sinks. That 1500 people die. You know this because it’s fact. It’s history. What I didn’t know until I read the book was that there was a ship nearby that saw the lights of the Titanic, that saw it’s distress signals and was within rescuing distance. But it did nothing. This ship was the SS Californian and this is its story.

It’s a book that had me begging, crying and grieving for people long before my time. It’s more than heartbreakingly sad … it’s bone crushing, weary heart devastation. I was angry at the characters and annoyed at how many small things could have been avoided … that could have saved 1500 lives. But the book isn’t angsty, and all though it’s heavy with emotion and guilt, it’s not a book that places blame on the reader or is overcome by its own emotion. It just is what it is, a book that needs to be read to be understood. To be felt.

This book is so much more than just the Titanic. It’s a story about human error and simply failings. Set largely after the fateful night and going well past the trails and inquests in both America and England, this is a story that will move you, that will break you and will heal heal you, all within it’s 318 pages. It’s a story of despair and the worst characteristics of human beings – grief, devastation, stubbornness,  ego and fear – but one coupled with the optimistic and hopeful movement of the suffragettes. It’s magical and nothing short of amazing and I honestly can not recommend this book enough.

David Dyer is clearly a man who knows what he is talking about. A self confessed Titanic fanatic, Dyer researched every assert of the Titanic and it’s following investigations. His passion and convictions shine through on every page, in every sentence and yet as a reader I never felt like he was preaching at me or talking down to me. Instead the writing, and the story he wove, felt honest, raw and real. His characters were more than three dimensional, they were like long lost family members. His settings so vividly described that I felt like I was walking down those cold streets, sitting in the back of court rooms and hiding out in the back of the pubs. But more importantly, his emotions and the feelings he evokes with this book alone, are larger than life. They transcend fiction. On more than one occasion whilst reading, I put the book down and wondered what I would have done had I been in that situation. I fear I might have frozen to death in water to be honest. Or have fallen under the weight and scrutiny that those aboard the SS Californian were subjected to for years to come.

There are a number of scenes that stand out in this book. Many that haunt me still months after having closed the book for the last time.  I can’t talk about them in great detail because I don’t want to spoil the book for anyone, but there’s a scene towards the end, when one of the characters fears she’s saying goodbye to her father and brothers for the last time aboard the Titanic. I have never cried so hard as I mourned with that character, not necessarily for her and her family, but for every family upon that ship that realised what was happening, that saw the situation for what it was. That asked questions with hard answers.

Two nights ago after getting Dyer to sign my book at the Sydney Writers Festival, I spoke to my Dad at large about this book. About the event and it’s problems. About the human failings and loss. About what we would have done if we’d been in any of these characters shoes. For over an hour both of us cried while talking about family and whether we’d take the chance at life even if it meant leaving behind those you loved. For the record we are in a stalemate over the latter question. My Dad’s not much of a reader, but he read this. He’s not an emotional reader, but even he was moved by Dyer’s tale and such is the power of words and thoughts.

I highly encourage everyone to pick up a copy of this book, for it’s messages  transcend time and culture. It speaks of love, faith and honour. Of courage for those are determined to fight for what they believe is true, of what it means to be belittled and questioned under you are surrounded by irreversible doubt. To be crushed under the heavy weight of guilt and lives lost. It’s a book that asks its reader, would you be strong enough to stand up for what you believe in, no matter the personal costs?

To purchase a copy of The Midnight Watch, visit the following online book retailers: