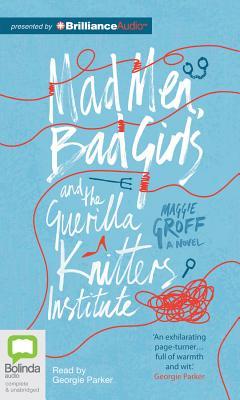 When a secretive American cult moves to the Gold Coast, freelance journalist Scout Davis’s investigative antennae start quivering. She sets out to expose the cult’s lunatic beliefs and bizarre practices, but when she learns the identity of a recent recruit, her quest becomes personal. And dangerous.

But Scout has her secrets too. In the dead of night she sneaks out with an underground group of yarn bombers to decorate the locality with artworks. The next mission ticks all the right boxes – it’s risky, difficult and extremely silly. However, Scout has a sneaking suspicion that the local police sergeant, Rafe Kelly, is hot on her tail.

I have a confession to make. Mad Men, Bad Girls and the Guerilla Knitters Institute came highly recommended to me by a good friend and publishing guru back in 2012 when the book was first released. I remember distinctly smiling at her and nodding my head. Promising to read it soon, while secretly not at all interested in the book. So when I came across this as an audio book in the library I thought it was about time I gave it a go. Turns out I should have listened to my friend years ago.

Mad Men, Bad Girls and the Guerilla Knitters Institute is kind of a complex book to describe. So much so that I’m struggling to sum it up in a quick and concise matter. It’s set mostly in the exotic, and much sought after location of Byron Bay Australia and follows a freelance investigative journalist Scout Davis as she deals with work, her family and the eye of a local men that she shouldn’t have feelings for. It’s part crime novel, part contemporary, part epic saga for Scout Davis does not live a simple life. While Scout’s boyfriend is overseas covering a story in Afganistan, Scout chases down the local (and not so-local bad guys and GIRLS), dealing with everything from randy policemen, teenage bullies and religious cult movements that threaten the very nature of society. It’s an epic and somewhat fun journey that is sure to see you moaning out loud (at some of the characters actions, or hot cop RAFE, your choice) and screaming in frustration and agitation at others.

Like I mentioned above I didn’t expect to like this book. I’m not a knitter and know nothing about it and the title implied to be that knitting would play a bigger part in the book. I kind of wish it did to be honest, even despite my reservations, as I really loved hearing about the secret beautification projects the Guerilla Knitters Institute got up to!

While I really enjoyed getting to know most characters that feature in the book, I really loved Scout. She’s witty, she’s sarcastic and hellauva smart and independent woman. She’s conflicted at times, but head strong regardless and she has a heart of gold. I also liked the fact that Groff made the deliberate choice to give Scout diabetes and actively had that condition feature heavily throughout the book. it got plenty of air time with it’s complications and everyday hassles, but I never felt like Groff was cramming the issue down our throats.

My biggest issue with this book is the pacing towards the end. It seems like everything is coming hard and fast and all of Scout’s ‘cases’ are coming to a head that it’s kind of rushed and wrapped up almost too neatly with a pretty little bow. Well a slightly off-centred pretty little bow none-the-less. While I don’t believe the story was sacrificed too greatly for this, I just felt like a bit more time could of been spent with the free fall towards the end. That rush of adrenaline and race to read faster was great, but it was over almost as quick as it begun; quite a contrast to the books slow and lazy Byron Bay start.

Georgie Parker was a surprise choice for narrator for this book. Mainly because I didn’t know she’d done it I guess though. Given Parker’s acting background it makes logical sense for her to narrate and read the book and she does a mostly fantastic job. But even Parker couldn’t save the slow slog of the books opening and her voice grated on my nerves in sections. But that’s more personal taste then anything else.

As a whole Mad Men, Bad Girls and the Guerilla Knitters Institute was a complete surprise read for me. I had no idea what to expect going in, not that it mattered because I was right there with Scout on her journey for 3/4 of the book. In writing this review, I just discovered there is a sequel to it – Good News, Bad News – which I’m actively tracking down now. I want more Scout Davies and her crazy, but epic discoveries.

To purchase a copy of this book, visit the following online retailers:

One thought on “REVIEW: Mad Men, Bad Girls And The Guerilla Knitters Institute by Maggie Groff & Read by Georgie Parker”