Format: Ebook courtesy of the Publisher and Netgalley 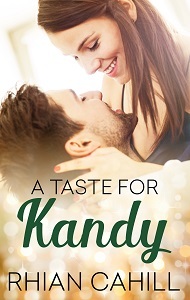 For her, Christmas has always been about family, which is why it hurts so much not to have one of her own…

It’s Christmas, the happiest time of the year and everyone around Kandy is pairing off. She should be excited for her friends but another year has gone by and she’s no closer to finding her own happy ending. When an opportunity arises to go after what she wants, Kandy grabs it with both hands.

Parker Jones has been in love with Kandy Cane since he was fifteen. Finally having Kandy’s undivided attention is a dream come true and he knows he has to work quickly to get under her skin and into her heart and stay there. But Kandy has a secret, one that could lead to a different kind of connection than Parker was hoping for.

Happy endings can’t be forced, but if Parker can convince Kandy of his love, they just might have a Christmas with all the trimmings.

It never feels like Christmas until I’ve read a Rhian Cahill Christmas novella, and this latest addition from Cahill does not disappoint. In fact, I think it might be my favourite yet.

Kandy Cane is back at Frosty the Snowmen’s and among the gang of much loved characters from the previous three novellas, and yet she is missing something. Seeing  her loved up friends Elle and Jack she yearns for what they have … love, a family and a child on the way.

She wanted that. A family.

She felt lioke an ungratfeul bitch whenever these hateful emotions took her over because she had a family. A large loving one with multitude of extended members, blood and not, except … it wasn’t enough.

She wanted her own, children with a mixture of features from her and the man she loved. And there in lay the problem. She didnt have a man to love – who loved her.

Right from the get go, I found myself relating with Kandy so strongly it kind of scared me to be honest. Roughly the same age as her, I’m experience many of the same desires and emotions as I watch countless friends get married and having babies. But it’s more than that, I just totally got her as a character. I understood her motives, her fears and desires and I felt for her. That said, I can’t agree with her spare of the moment decision, but I felt for her with the mounting secrets and dilemmas as her perfectly crafted  life appeared to spiral out of control.

Parker Jones works for Kandy and the gang at Frosty’s Snowmen as a mechanic like his father before him. He loves what he does well enough, but it’s not the job that brings him to work everyday, no it’s boyhood crush for his boss-lady Kandy, a family friend and the women of his dreams. Parker has been in love with Kandy for what feels like forever, but despite one night together, he can’t seem to get his timing with Kandy right, nor the women out of his mind.

When secrets are revealed and truths are thrown into the harsh glare of reality, Kandy Cane and Parker Jones need to work out if what they have is anything more than a one night stand, and can they make the distance? Will Paker be the happily ever after for Kandy? Or is she destined to just to be the girl he dreams of for the rest of his life.

At first I was a bit weary of Parker’s age. He is described in the book as being ‘eight years’ younger than Kandy, and while it’s not a huge age gap it was one I struggled with initially. Most this struggle came from my fear that although the two characters had chemistry – and boy did they have chemistry-, would they share the same life goals and be at similar stages of life? Kandy is desperate to settle down and have a family of her own, but comparatively Parker is just starting out in to his adulthood. I did get over this, and fell head first in love with the story, but it was something that brought me out of the story for a bit. A Taste Of Kandy just goes to prove how age is just a number when faced with love.

Once again my biggest commiseration with these Christmas Novellas is that I always want more. I was so glad to see the characters from previous books cameo for more than one line, but I’m desperate to dive into my books in this series and yet I think this might be the final one in the series – a fact I’m not certain on, but I swear I read that somewhere and now can’t find it. That said, I don’t feel like the story was rushed or missing anything, but it would be nice to spend more time with the characters and see more than just a week in their lives.

Once again Rhian Cahill delivers a short but sweet and oh-so-perfect Christmas novella that is sure to put a smile on your face, a skip in your step and the festive in your festive cheer.

To read my reviews for the rest of the Frosty Snowmen Series and other Christmas Novella’s by Rhian Cahill, click on the bool’s title: A Touch Of Frost ;  A Kiss From Kringle; and a stand alone Christmas Novella Christmas Wishes and Secret Santa.

To purchase a copy of A Taste Of Kandy, visit the following online retailers: