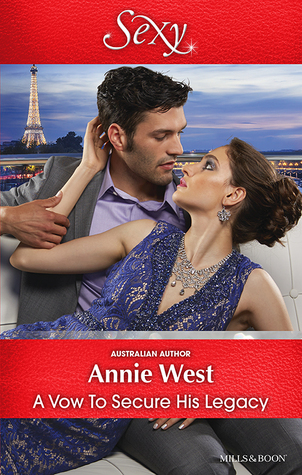 After losing her mother, Imogen Holgate believes she’s living on borrowed time with the same terminal illness. So the cautious accountant blows all her savings on a once-in-a-lifetime trip around the world, where she meets sexy Parisian Thierry Girard.

Now with more than herself to think about, Imogen turns to Thierry to help, but the last thing she expected was for him to imprison her with a gold ring!

It’s no secret that I absolutely adore everything Annie West writes – seriously I think even her grocery list could be considered riveting! – and yet there was something about this novel that exceed even my expectations and has made it one of my books for 2016.

Having watched her mother suffer for a long nine months at the hands of a fatal (and brutal) tumour, Imogen is emotionally, mentally and physically drained. So when she receives some less than ideal medical news of her own, it’s no wonder she packs her bag and jet sets overseas to experience life with out baggage and worry. Before long she is travelling Europe and has found herself the perfect man in Thierry.

A Vow To Secure His Legacy is a sweet and sexy, and utterly divine romance novel that is sure to sweep you off your feet. Imogen might be bruised and batter physically and emotionally, but she is so much fun to read and experience life with.  She is strong and independent and she knows what she wants – and how to go about getting it! Thierry on the other hand is the perfect man. Equal parts loyal, charming, sexy, caring and romantic he too know what he wants and how to get it, but he is also waylaid by societies and his own families expectations.

When Imogen finds out she is pregnant after their passionate encounter, her first thought it not of her own ailing health, but that of her child’s future. Rushing back to France to find Thierry and to secure her child’s future, she doesn’t expect or predict the ring that Thierry insists she wears and so their life together becomes instantly more complicated and real.

What I adored about this book was that both Imogen and Thierry’s initial relationship was inspired by the most raw and overwhelming desires – for passion, for a partner, for life – and that neither of them expected it to go anywhere. When they are thrown unexpectedly back together the pair reach a mutual agreement and yet what they get is so much more than just a relationship in name. Together they teach each other about life, love and loss and what it truly means to be alive. Their love is pure and honest and rarely glimpsed in fiction. I loved it.

Part marriage of convenience, part secret/surprise baby, part pure amazing, A Vow To Secure His Legacy is a narrative no self-confessed hopeless romantic can afford to miss!

To purchase a copy of the book, visit the following online retailers: