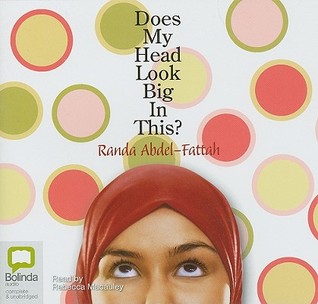 The slide opened and I heard a gentle, kind voice: What is your confession, my child? I was stuffed. The Priest would declare me a heretic; my parents would call me a traitor …The Priest asked me again: What is your confession, my child? I’m Muslim. I whispered. Welcome to my world. I’m Amal Abdel-Hakim, a seventeen year-old Australian-Palestinian-Muslim still trying to come to grips with my various identity hyphens. It’s hard enough being cool as a teenager when being one issue behind the latest Cosmo is enough to disqualify you from the in-group. Try wearing a veil on your head and practising the bum’s up position at lunchtime and you know you’re in for a tough time at school. Luckily my friends support me, although they’ve got a few troubles of their own. Simone, blonde, gorgeous and overweight – she’s got serious image issues, and Leila’s really intelligent but her parents are more interested in her getting a marriage certificate than her high school certificate! And I thought I had problems.

I read this book earlier this year now (back in late April/Early May to be exact) and it tackles some major and rather topical issues that the world was facing then, and still is today, despite having been published in 2005.

Does My Head Look Big In This? Was Randa Abdel-Fattah’s début novel back published in 2005. More than ten years on this book is still not only astoundingly perfect, but it’s extremely relevant and topical and I honestly urge everyone to pick it up and read the book. We always talk about the books that changed your life, but I seriously believe this one not only holds the power to change your mind, but your heart, as it tackles the heavy topics of racism, culture, religion and teenage expectations and life in current society. It’s a book that made me understand a culture and religion that is so pushed down and harshly judged for the actions of a few radicals who are so far off book.

With Does My Head Look Big In This?, Randa Abdel-Fattah has crafted the most wonderful and moving story that will not only entertain you, but it will capture your heart and mind, allowing you to glimpse a very misunderstood culture and it’s people in the most relaxed way all within the safety of your lounge room.

Amal is just a typical Australian teenage who has a love/hate relationship with school, loves her best friends, loves fashion and shopping and has a crush on the guy in year 11. But she is also Muslim, and just as she prepares to start her third term of year 11 she makes the personal decision to wear the hijab ‘full-time. Feeling she is ready to take on this role and everything it represents Amal believes she is strong enough to endure everything society can and will throw her way; but her parents feel otherwise and warn her constantly how hard the transition and reality can be. Not one to be persuaded, strong headed Amal powers through misconceptions, mistreatment and plain religious and ethnic prejudices is the most remarkable and uplifting way. No, Does My Head Look Big In This? Is not a story for the faint of heart, or prejudice. But it is a story that is humbling, uplifting, and at times quite confronting. It’s a story that has the power to turn your world on its head and leaves you wanting to know more … to find a person in similar circumstance and hug them and tell them you are on their side.

What’s astounding about this book, is the way that Randa Abdel-Fattah has balanced the light heartedness of every day life with the serious and comical teenage years, as well as dealing with racial difference and prejudice. Does My Head Look Big In This? Could have so easily have been a frustrations rant or dressing down, but Randa Abdel-Fattah was able to take the story and make it so much more.

Simply put this book was inspiring. It opened my eyes to another culture in such a humours but down to earth way, all the while maintaining it’s beliefs, integrity and most importantly respect. I really enjoyed Amal’s insights and loved her gutsy and take no-prisoners approach to life. Amal is a character that demands your acknowledgement, if not your respect and I loved how true and hard she believed in everything. Her conviction and faith made me stop at times and contemplate my own beliefs and perceptions and whether I would be strong enough to endure what Amal does for her hard earned beliefs.

I highly recommend this book to everyone no matter their nationality, ethnicity or religious background. Regardless of whether you are 12, 42 or even 102, Does My Head Look Big In This? Is a universal book that everyone should and needs to read at least once within their lifetime.

To purchase a copy of Does My Head Look Big In This? visit the following online retailers: