Format: Paperback (courtesy of the publisher) 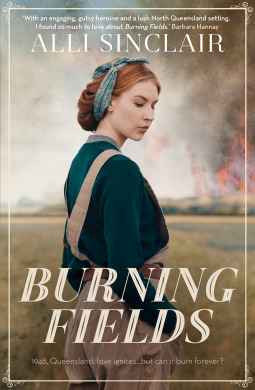 1948. The world is struggling to regain a sense of balance after the devastation of World War II, and the sugar cane-growing community of Piri River in northern Queensland is no exception.

As returned servicemen endeavour to adjust to their pre-war lives, women who had worked for the war effort are expected to embrace traditional roles once more.

Rosie Stanton finds it difficult to return to the family farm after years working for the Australian Women’s Army Service. Reminders are everywhere of the brothers she lost in the war and she is unable to understand her father’s contempt for Italians, especially the Conti family next door. When her father takes ill, Rosie challenges tradition by managing the farm, but outside influences are determined to see her fail.

Desperate to leave his turbulent history behind, Tomas Conti has left Italy to join his family in Piri River. Tomas struggles to adapt in Australia—until he meets Rosie. Her easy-going nature and positive outlook help him forget the life he’s escaped. But as their relationship grows, so do tensions between the two families until the situation becomes explosive.

When a long-hidden family secret is discovered and Tomas’s mysterious past is revealed, everything Rosie believes is shattered. Will she risk all to rebuild her family or will she lose the only man she’s ever loved?

Every now and then a book comes along that completely knocks you for a six. Burning Fields by Alli Sinclair was one of those books for me. So much so that for months, I’ve been sitting on this review, trying in vain to express how brilliant this novel is and failing miserably to do so. So bare with me because I have a lot to say …

Burning Fields is a beautifully written, honest and stark novel set in 1948 when the world was trying to find it’s feet once again post the world wars. It’s a novel about finding yourself and your place in the world, about the importance of knowing who you are and what you stand for, about right and wrong, women’s rights, immigration, respect and perhaps most importantly love. Love for yourself, those around you and each other.

I’m a long time fan of Alli Sinclair’s writing, so when my review copy of this book turned up on my doorstep there was a lot of happy dancing going on. Right from the very first page I was immediately immersed in the world of 1948 Australia, SInclair’s writing was so visceral that I almost felt like I was sitting there on that bus with Tomas Conti and Rosie Stanton, watching the pair in a milestone moment that neither of them realised was happening. I was there in the fields, and screaming along in the Stanton household. I was frustrated, angry, and left devastated by aspects of the book, but I couldn’t stop myself from racing through the pages, desperately trying to find out what happened next.

Rosie Stanton is a fiery and fiercely independent young woman, who knows her place in the world, but isn’t happy to settle for second best. Born into a multi generational farm family, the only daughter of John and Cecile Stanton, and older sister to two younger brothers believed to have been lost at war, she knows the rules and ways of small towns and farming communities; she simply doesn’t agree with them. Having returned home reluctantly after serving in the war as part of the Australian Women’s Army Services in the city, Rosie has experienced a lot more of the world than Piri River is ready to accept. She’s seen women take a stand and successfully complete jobs previously believed far too superior for their feminine brains. With the war well and truly over, and the brave young men returning home to claim their jobs, Rosie isn’t ready to give up her new found freedom. She isn’t ready to fall back into a neat box. She doesn’t conform, and refuses to move when people expect her to and I love her even more for it.

Tomas Conti is a man of many secrets; ones he holds near and dear to his heart and some he would rather take to the grave then let them be known. As an immigrant from ‘Palermo by the way or Roma’ he is an outsider in the small town of Piri River, where war torn prejudices are still held onto strongly. Tomas has moved to Australia to live a quiet life of freedom, free from oppression, war and most importantly guilt. However on his first day in the region, he meets Rosie Stanton on the bus, and his life will never be the same for it.

Rosie and Tomas  have the most perfect slow burn romance. Weary of each other in the beginning, and then put on the back foot by their respective families and past grievances, the pair are irrevocably drawn to each other time and time again. While each character is strong in personality, spirit and resilience on their own; together they create the most unlikely united front and face head on racism, theft, family differences and without even knowing it, they heal the deep seated fault lines with in each other. They are simply perfect, and I can not recall how many times I swooned while reading this book. Sure, they fight, and both are incredibly stubborn that I yelled at them through the pages just to do something, to talk, to reason, to see the bigger picture, but they made me smile, and my heart swell … and I loved them.

I thought I knew what I was getting into when I picked up Burning Fields by Alli Sinclair, but nothing could ever have prepared me for the book before me. What I thought would be a romance typical of the time period, was so much more than that; It challenged almost every facet of social commentary, feminism, sexism,  racism, family drama, mystery, intrigue, romance, romantic suspense elements, heroism, alcoholism, illness, bigotry, family dynamics and restructuring.. there is almost nothing this book does not touch on. While many of these are hard hitting, raw and honest elements that should create a very dark and hard to read book, Alli Sinclair has expertly weaved and balance the lighter elements of romance, hope, survival throughout the novel, giving the narrative not only a lot of positive outlook and uplift, but a sense of authenticity too that speaks both to the time period and our contemporary world of today. Life isn’t always sunshine and roses, and sometimes we have to fight the hardest battles with those closest to us in order to define and learn who we are individually as a person, before collectively as a group.

Contextually this book hit home with ssues that are still being dealt with in present day society. A point that makes me sad, and all that much more aware of how many people have fought them before us. In particular, around the time I read this, the #metoo movement was in full power and contemporary Australian society was giving authority figures hell for a statement that ‘women need to be more careful of their surroundings’ when alone, after two attacks on women, one of whom was tragically killed. Thus the following passage from this book hit me hard:

Why do men think it’s perfectly fine to harass a woman, especially when she’s alone? What kind of world was this?

Burning Fields might be a novel written about and set within the constantly evolving world of 1948, but many of its themes, challenges and even social commentary still hit home hard today.

Alli SInclair, I bow down to you. Burning Fields was nothing like I expected and everything I wanted and needed without knowing it. I talked a lot prior to this books release about how powerful the cover image was, and how much I loved it, but in hindsight the cover is even more perfect for it represents this book so brilliantly. Burning Fields is a poignant book about wars fought far away in other countries, and those set right in our back yards between families, neighbours and even friends. It’s beautifully written, and packs one hell of a punch that you barely even recognise is coming your way. I am intensely jealous of anyone reading this book for the first time, as I myself can not wait to dive into it again and again.

I highly recommend this book to everyone.

To purchase a copy of Burning Fields by Alli Sinclair, visit the following online retailers: