Long lost Reviews (LLR) is a  monthly featured hosted by Ally @ Ally’s Appraisals where bloggers are encouraged to tackle their review backlog with book reviews that have been sitting there for a long time. Reviews can range from in-depth analyses to one sentence statements with no pressure applied. To learn more and see participating blogs visit Ally’s blog here. 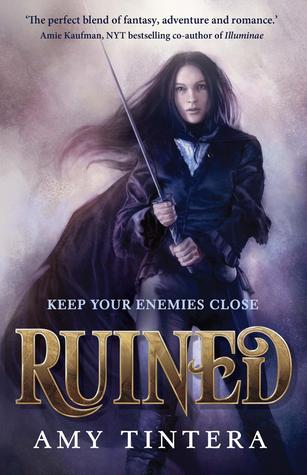 Emelina Flores has nothing. Her home in Ruina has been ravaged by war; her parents were killed and her sister was kidnapped. Even though Em is only a useless Ruined – completely lacking any magic – she is determined to get revenge.

Her plan is simple: She will infiltrate the enemy’s kingdom, posing as the crown prince’s betrothed. She will lead an ambush. She will kill the king and everyone he holds dear, including his son.

The closer Em gets to the prince, though, the more she questions her mission. Her rage-filled heart begins to soften. But with her life – and her family – on the line, love could be Em’s deadliest mistake.

Today’s long lost review was literally a review I lost until I went digging through my long-forgotten draft posts … note to self, you need to clear them out more often

According to Goodreads, I read this book way back in 2016, and I recall really liking it. Hence the four-star rating I gave it four years ago. I think I must have read it around winter time because I can distinctly remember being curled up with a Max Brenner hot chocolate, my maroon scarf and this book.  I’m a sucker for medieval-style fantasy worlds, royalty, forbidden love and marriages of convenience.  So this book had everything I wanted out of a book.

I also recall it being highly addictive and a page-turner. Em was a questionable character at times, but her heart was always in the right place even if her methods weren’t always the best.  Don’t you just love those morally grey books where you can’t work out which side you should trust more, but have all the feels? I can’t really remember much about the prince himself, except his name ways Cas and I remember really hoping at the end of this book that the two of them (Cas and Em) could find a way to be together despite the shit-storm that was coming their way.

The romance was heavy in this fantasy, and I was all here for it. A point that made the ending oh-so-more nerve-racking. This book I think ends on a cliff hanger, or at least at a point where Em and her prince have separated ways and you legit don’t know where it’s going.  It was hectic and it was a hell of a year to wait for the sequel … that I still haven’t read, but really want to.

I read this book back before I begin to post-it-note my books, and I really wish I had more notes on it. I do wish to continue with this series in the future, so I will have to do a re-read sometime in the future.

Tintera’s writing was witty, sarcastic and just enjoyable. I distinctly recall being swept away by this narrative, but I know something held me back from giving it a five-star rating, and I legit have no idea what that was right now.

To purchase a copy of Ruined, visit the following online retailers: