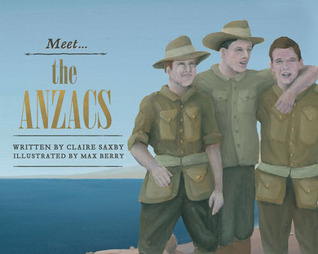 A picture book series about the extraordinary men and women who have shaped Australian history. ANZAC stands for Australian and New Zealand Army Corps. It is the name given to the troops who fought in the Battle of Gallipoli in World War I. The name ANZAC is now a symbol of bravery and mateship. This is the story of how the ANZAC legend began.

Meet The Anzacs is the fourth book in Random House Australia’s Meet… Series.

Meet The Anzacs is a great book for kids to learn about the Anzacs who fought for our country and freedom. It’s straight forward, and tells the facts about the early war efforts on Australian soil and how excited the country’s men were to be able to volunteer and serve their country. It’s simplistic in language, beautifully illustrated, and rather educational as well, for the very first page of the book starts off with a simple explanation of what ANZAC stands for:

Surprisingly this book packs a lot into into it terms of the war experience, covering the time from the initial war announcement and recruit sign ups (“the join-up queues stretched for miles. Officials turned away men who were missing teeth, who wore glasses or had flat feet“), to training camps in Australia (“Training camps for the soldiers popped up like mushrooms after rain. Exercise drills kept them fit and mock battles showed them how to fight as a team”) and Egypt (“Some days the men packed up camp, marched for hours and set up in a new spot, only to pull the camp down again the same day. It was all practice for war.”) and their arrival at Gallipoli (“Before dawn on 25 April 1915, The Australian and NEw Zealand soldiers scaled the rope ladders. As the last man squeezed into a landing boat, they pushed off into darkness”). However this book does not go any further than simply stating that the troops arrived there and “war was like nothing they could have ever imagined.” Thus, this book was intended as an introduction to the men and the legend and myths that surrounded them, not their total war experience, making it fine for young children to read without the fear of your child getting upset or being exposed to aspects of war that they are not ready for.

Featuring full double spread illustrations there is no doubt that this book is stunning and true to the time period as the colour pallet is mostly dark colours and various shades of brown, and the text similar to that of a typewriter.

I really enjoyed this book, and highly recommend it for anyone whose looking for an introductory and educational book about the beginning of Australia and New Zealand’s war efforts in 1915.

To purchase a copy of Meet The ANZACS visit the following retailers:

One thought on “REVIEW: Meet… The Anzacs By Claire Saxby & Max Berry”