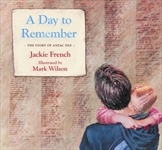 Anzac Day is the day when we remember and honour Anzac traditions down the ages, from the first faltering march of wounded veterans in 1916 to the ever increasing numbers of their descendants who march today. Containing reference to the many places the ANZACs have fought, and the various ways in which they keep the peace and support the civilians in war-torn parts of the world today, this is a picture book that looks not only at traditions, but also the effects of war.

A Day To Remember might be a picture book, but it’s not only for children. Adults could and would learn a lot from reading this beautifully presented history of Anzac day, it’s history and traditions.

Through this book Jackie French cleverly portrays the vast history of Anzac day and its various traditions. She presents both popular and well known facts along side the more negative connotations associated with war and offers all up to the reader to make their own decision.

“The last Allied ships left Gallipoli in January 1916. Over 8,000 Anzacs had been killed and 18,000 had been wounded. A further 8.000 were missing – possibly captured, or blown to fragments – fighting for, and losing, a small part of someone else’s land. But the legend had spread in newspapers across the world, of heroes who would advance no matter what the odds, of mates who’d share their last crust with a mate, of Diggers who’d refused to salute an officer and blokes who died with a last joke and a smile.

It was exaggerated, simplified. Not all were heroes, too.

But it was mostly true.”

What I found particularly interesting with this book was the way that Jackie French focused on the concept and meaning of Anzac day through various generations and the way that it was developed, shaped and then lessened in meaning before reaching height again today. The narrative is told in almost diary-like entries ranging from covering that fateful day at war in 1915 all the way up to present time (and potentially the future). Although brief and to the point, French has tried to cover all the different aspects, beliefs and experiences of war and its aftermath in a way that both children and adults alike can enjoy and take something from it. I for one was unaware that the Sydney Dawn Service originated because of an “elderly woman [who] laid a wreath of flowers at the Sydney Centotaph” in 1927 and happened to come across ” a small group of returned soldiers” who all agreed ” that next year there would be a service here at dawn”. Likewise, I had never thought of early celebrations and services on Anzac Day and was surprised to learn that in even in 1934 after dawn services had become popular throughout Australia and New Zealand, that women were excluded “in case women’s crying disturbed the silence”. All in all I found this book fascinating to read, even as an adult who has studied the wars in great detail.

A Day To Remember is a beautiful book that captures the heart of Australian history and society, whilst reflecting on what exactly made us the way we are today. What’s more, French’s tale couldn’t come at a better time for every Anzac Day brings about the debate of the day’s true meaning and origins and whether it is still relevant and celebrated today. As French demonstrates in her book, I’d say the tradition is well and truly alive, with more families celebrating this historical occasion each year. While it’s true the original ANZAC’s might no longer be with us, their stories and voices still live on, and APRIL 25th is a special day when we stop and listen to them. And while it’s true that we celebrate them as well, we also remember them and thank for their courage and bravery, for the sacrifices they made in 1914 for us to be here now in 2015.

Although a picture book and suitable for children, I don’t recommend this book for young children under the age of say 8 as it is very heavy on the history and less narrative based.

To purchase a copy of this book visit any of the following retailers:

2 thoughts on “REVIEW: A Day To Remember: The Story Of Anzac Day by Jackie French and Illustrated by Mark Wilson”