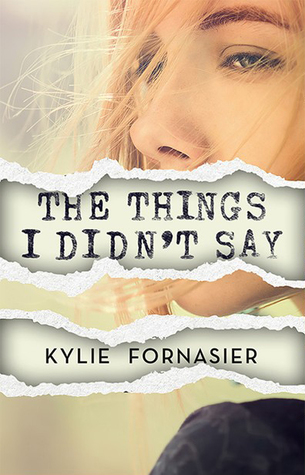 I hate the label Selective Mutism – as if I choose not to speak, like a child who refuses to eat broccoli. I’ve used up every dandelion wish since I was ten wishing for the power to speak whenever I want to. I’m starting to wonder if there are enough dandelions.

After losing her best friend that night, Piper Rhodes changes schools, determined that her final year will be different. She will be different. Then she meets West: school captain, star soccer player, the boy everyone talks about. Despite her fear of losing everything all over again, Piper falls in love – and West with her – without Piper ever speaking one word to him. But will it last?

Things I Didn’t Say was another book I picked up early because of Penguin Teen Australia’s #YASquad2016. I’ve actually been waiting for this book to come out for a while because I love everything Kylie Fornasier writes and this book is no exception.

I wonder how long it will be until everyone at school realises I don’t say anything, until I become that girl with Selective Mutism. I hate the label Selective Mutism – as if I choose not to speak, like a kid who refuses to eat broccoli. I’ve used up every dandelion wish since I was ten wishing for the power to speak whenever I want to. I’m starting to wonder if there are enough dandelions.

Like most people, I had never heard of Selective Mutism before or knew of anyone who suffered from it, so this book was a real eye opener for me. It was also refreshing to see a YA narrative dealing with the largely taboo subject of a mental illness. For those unaware, the following definition comes from The Selective Mutism Foundation website:

Selective Mutism:Selective Mutism is an anxiety disorder characterized by not speaking outside the home to select individuals or in select settings, which continues for more than 1 month. It is most commonly found in children. They understand spoken language.

Piper Rhodes has Selective Mutism (SM) and it’s kind of ruining her life. Especially when she starts yr 12 at a new high school. Suddenly, no one knows who she is, and although the teachers have been informed of her situation, that doesn’t mean the students have. Queue awkward one-sided-conversations and suspicious looks. All of which doesn’t help when she sits alongside the school’s most sought after guy, West Kennedy in German one day. Even more so after they have sparked up a unique friendship that shows promise of more. West knows about Piper’s SM, but can he accept it the fact that she can’t talk … especially when it comes to him?

I get caught up reading someone’s frustrations are being asked the same question all the time: why don’t you speak? I know how annoying this can be. It’s either that question or the more annoying variation: what happened to you? People seem to think that there has to be a reason you don’t speak. You must have been traumatised, abused, raped or witnessed something horrible. Sometimes that’s true, but most of the time it’s not.

I quite liked quiet Piper Rhodes. As far as character development goes, she comes along way in this book but in a kind of subtle and underhanded way. She makes friends, learns to trust and has her heart healed and broken by those around her. Her journey is kind of background, despite being the main character and the only point-of-view the narrative has. Which is pretty damn clever on Fornasier’s part, as it not only let’s her strength of character shine through, but doesn’t bog the narrative down in morals or life lessons. It was refreshing.

I loved the idea of West Kennedy. Right from the get go he is a completely different male lead then any other I’ve read recently. Sure he is popular and has it all, but he is this gentle character and has the strength to just be on his own. It sounds weird I know. But it’s like he is that stereotypical teenage boy at first glance, but there’s so much more than meets the eye. Take his first meeting with Piper for example. Noticing how uncomfortable she is, he writes full conversations down and he doesn’t put any pressure on her. He didn’t judge her, he got to know her. An unusual trait for high school kids at that age especially.

Thanks, I want to say. West is a pretty cool name too. Is it short for something? Weston? Westly? I’m never lost for words. I know exactly what I want to say, but the words don’t come out. Just thinking about speaking causes my throat to tighten and my mouth to go dry.

What’s more I loved his interactions with Piper. It was like he lived for her – without being too creepy and over the top – and he only came alive when she was around. Which brings me to my only problem with West Kennedy; he was a character that was half and half for me. Too perfect to be true. He ONLY came off the page when she was around, and even then it sometimes seemed a bit stinted. But I still kind of love him.

With SM, when you become close to someone, it is easier to speak to them. With Cassie, it took about a month. I’ve known West longer than that but it’s a completely different situation. There’s too much I want to say to him and I’m worried about what he’ll think when he hears me speak.

Which brings me my next point. I wanted to yell, scream and kick West Kennedy at times too. West knows that Piper can talk to her parents and a few select people and he wants in. He’s fallen head over heels for the girl, and although he’s patient, patience only lasts so long and suddenly there’s cracks in his character as he tries to get Piper to talk to HIM. It’s through these sections of the book that I realised just how protective of Piper I’d become. It was like I was defending one of my own friends!

Kylie Fornasier needs to be commended on creating such a fantastic and vibrant cast of secondary characters. I personally loved reading all the interactions with Piper’s family. That house hold just seems so full of love and I love the baiting of sibling rivalry scattered throughout the book. Likewise with Piper and West’s class mates, Fornasier has gone above and beyond to create a realistic school environment with a cast of mismatched students filling the halls. On this note, that post-it-note scene? That quite possibly nearly made me cry. All of them. I loved the idea and could picture the whole scenario in my head so vividly. So perfectly.

I really liked the idea of this books and the narrative flowed really well. Unfortunately I’ve marked it down a bit, as I found the beginning of the book to be a bit slow and hard to get in to. I think this might have been hindered by a personal response to the book however, as I didn’t instantly connect with any of the characters, nor did I know much about Selective Mutism or anyone who had it. That said I did read the book rather quickly, I think it was over two days if I remember correctly and I was right there with the characters for the most of it.

Things I Didn’t Say may be primarily about a coming-of-age story for a year-twelve student with SM, but it reads a lot younger. And yet it oddly works. There’s mention of booze and parties, and one fade-to-black scene, so the characters act like year twelve students, but the narrative seems to be target at a slightly younger side of the YA genre. This I assume would be because most people affected by SM are usually slightly younger, a point Piper herself mentions in the book once or twice. That’s not to say that it’s implausible for a 17 year old girl to be suffering from it as well.

That’s the problem with SM, it can go undiagnosed for so long. I was always shy and quiet. When I started kindergarten, I began speaking less and less at school until I wasn’t speaking at all. At first, when my teacher brought it to my parents’ attention, they said I was just shy and I would grow out of it. When I didn’t grow out of it, everyone thought I was being stubborn and I’d soon get tired of it.

It wasn’t until I was twelve that my first psychologist, Dr Rankmore, finally diagnosed me with Selective Mutism. I can’t help wondering if I would still have this disorder at seventeen if it’d been diagnosed years earlier.

All in all I love that Fornasier was brave enough to take the path less trodden and give us such a unique and inspiring book. For Things I Didn’t Say is about hope at it’s core; and what a beautiful story it is.

All I ever am is careful, careful with words, careful with people. West is what I need. He shows me what life can be if I’m not careful and I like that life a lot more.’

NOTE: Another reader brought to my attention that Until Friday Nights by Abbi Glines deal’s with Selective Mutism – it just doesn’t call it that. So I have read another book on the subject. But you know what, I don’t think Glines nailed the subject matter as well as Fornasier does. The emotional and every day struggle is missing in that book, and it’s on every page in this one without being over the top and unbearable to read.

To purchase a copy of Things I Didn’t Say, visit the following online retailers:

One thought on “REVIEW: The Things I Didn’t Say by Kylie Fornasier”